Silverstone round launches the final assault to GT Open titles

The summer break is over and the International GT Open will be taking the track again this weekend for its sixth round of the season, at Silverstone. The legendary track, home to British GP, opens the final and decisive part of the season, which includes two other ‘temples of speed’, Barcelona and Monza. British fans have become increasingly fond of the GT Open over the years and they will have the possibility to enjoy even closer and more exciting action this year and to cheer for top-level local heroes.

With five driver pairs (representing three different teams and brands: Lamborghini, MacLaren and Mercedes) covered by only 15 points at the top of the overall standings, the fight for the 2019 title could not be more intense.

The Silverstone round features an exciting race programme, which includes the highly-competitive Euroformula Open, one of the top European single-seater feeding series, the GT Cup Open Europe, the new GT series below GT3 by GT Sport, on its first visit to the United Kingdom, and the iconic Alpine ELF Europa Cup.

Two pairs top the Overall rankings: Albert Costa and young gun Giacomo Altoè took two wins so far at the wheel of the Emil Frey Racing Lamborghini Huracan Evo, but are tied at 70 points with the Teo Martín Motorsport McLaren 720S of Henrique Chaves and Martin Kodrič, who have conquered 4 podiums and scored in all races but are still chasing their first success. Part of the top battle are also the other McLaren of the Spanish squad, with Fran Rueda-Andrés Saravia having won two races, only 10 points behind. Similarly to Chaves-Kodrić, Miguel Ramos and Fabrizio Crestani, the pair at the wheel of the SPS Automotive Performance Mercedes, have scored points in all races and taken three podiums but are still lacking a victory. They are only 14 points adrift the top, and one in front of Mikaël Grenier-Norbert Siedler, the other pair of Emil Frey Racing, who by contrast are the only ones to have conquered three wins so far.

Candidates to victory in the Pro class go beyond the top quintet and certainly include Optimum Motorsport and its Aston Martin Vantage. The all-British outfit will certainly benefit from the ‘home effect’ and get a lot of attention, especially after taking their maiden win at the Red Bull Ring right before the summer break, in the historic 200th race of the series. For this occasion, young gun Ollie Wilkinson will be associated with GT legend Darren Turner.

Senkyr Motorsport returned to the GT Open at the last round in Austria and was immediately able to put its BMW M6 on the podium; at Silverstone, Richard Gonda and Beitske Visser will want to climb one more ladder, which would make of the Dutch driver the first woman to win a GT Open event.  The Antonelli Motorsport Mercedes has often been on the forefront in the first part of the season, and Daniel Zampieri, joined for this round by Loris Spinelli, will be eager to shine, as will be the Lazarus Racing, now on a one-Lamborghini Huracan Evo entry, with Nicola De Marco-Eliseo Martínez, and the Ombra Racing Huracan of former GT Open champion Federico Leo and Malaysia’s Najiy Razak.

PRO-AM: MANY BRITS TO BE WATCHED

Always very well-attended and very competitive, the Pro-Am class provides another great title battle and another Union Jack hero. Tom Onslow-Cole has proven to be one of the fastest drivers in the series and together with his team mate Valentin Pierburg leads the class standings, with three wins under their belt. The SPS Automotive Performance Mercedes pair has an 11-point gap on the Frederick Schandorff, the young Dane now associated with Finland’s Tuomas Tujula at the wheel of the Vincenzo Sospiri Racing Lambo, who took a maiden win for the car at their first outing together in Austria. Third in contention is the SunEnergy Mercedes of Kenny Habul-Thomas Jäger, right ahead of the Teo Martín McLaren of Marcelo Hahn-Allam Khodair.

Ferrari entries in the class have a lot of connections with the Union Jack: Duncan Cameron and Matt Griffin, with the 488 of Spirit of Race, are determined to shine on their home event, while GT experts John Hartshorne and Oliver Hancock will make their debut in the GT Open at the wheel of a car of Kessel Racing. The Swiss team makes a very welcome come-back to a series, where it has collected some of its most prominent successes, including five GTS titles. A third 488 is entered by Tempesta Racing for Chris Froggatt-Eddie Cheever.

Lamborghini colours in Pro-Am are well defended by Raton Racing by Target, with Jiatong Liang-Raffaele Giammaria having already one win to their credit and the other machine of the Italian squad entrusted this time to a pair to be designated. The Mercedes camp, on its side, can rely on an additional top car, fielded by HTP Motorsport/Winward Racing for Russell Ward-Indy Dontje, who took a win in their only appearance so far, at Hockenheim.

AM: THE STAR SHINES HIGH

Things look clearer in the Am category, where the Mercedes AMG dominate the grid. The HTP Motorsport Austrian pair composed of Alex Hrachowina and Martin Konrad seems well suited to take the class title, having collected six wins out of eight. Still, nothing is done and the two lone-driven Antonelli Motorsport cars of Davide Roda (2 wins) and Giuseppe Cipriani still can revert the situation, being both 11 points behind the leaders. The outsiders, this year, are double class champions Manuel Da Costa-Miguel Sardinha, the Portuguese pair of Sports&You. 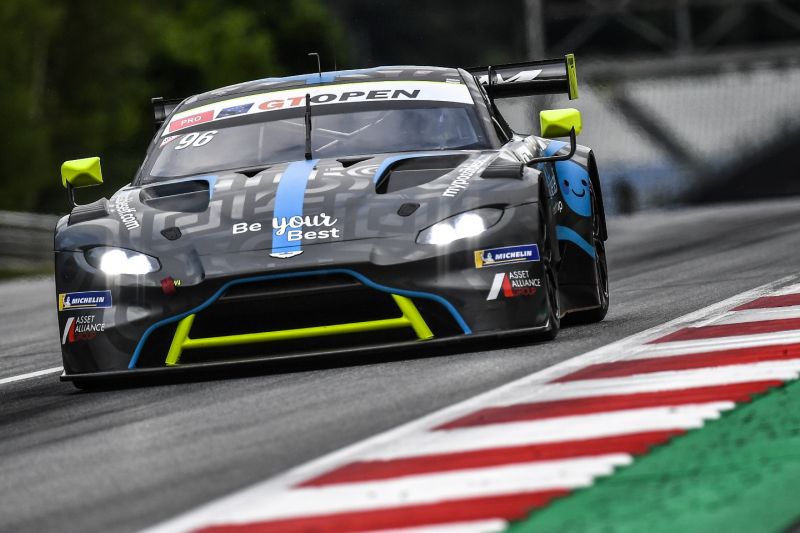